Our company name FPS stands for Flat Panel Speaker, and FPS speakers use Plane wave technology. This technology is quite different from conventional cone speakers due to its sound waves (spherical wave and plane wave) and the speed of its sound transmission. FPS Flat Panel Speaker is the next generation speaker unit; this new generation speakers are composed of our newest flat speaker unit, "MCMA." 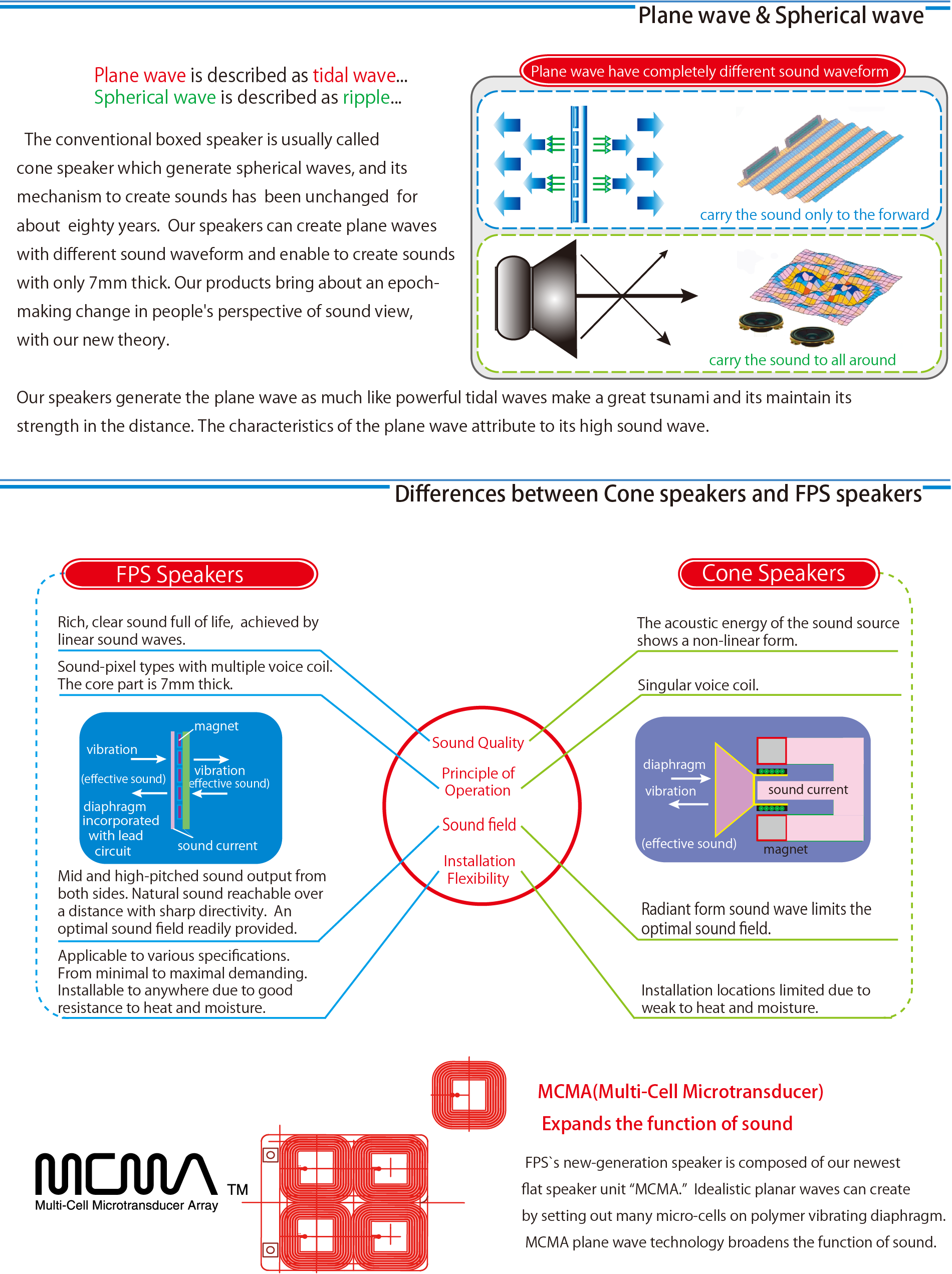 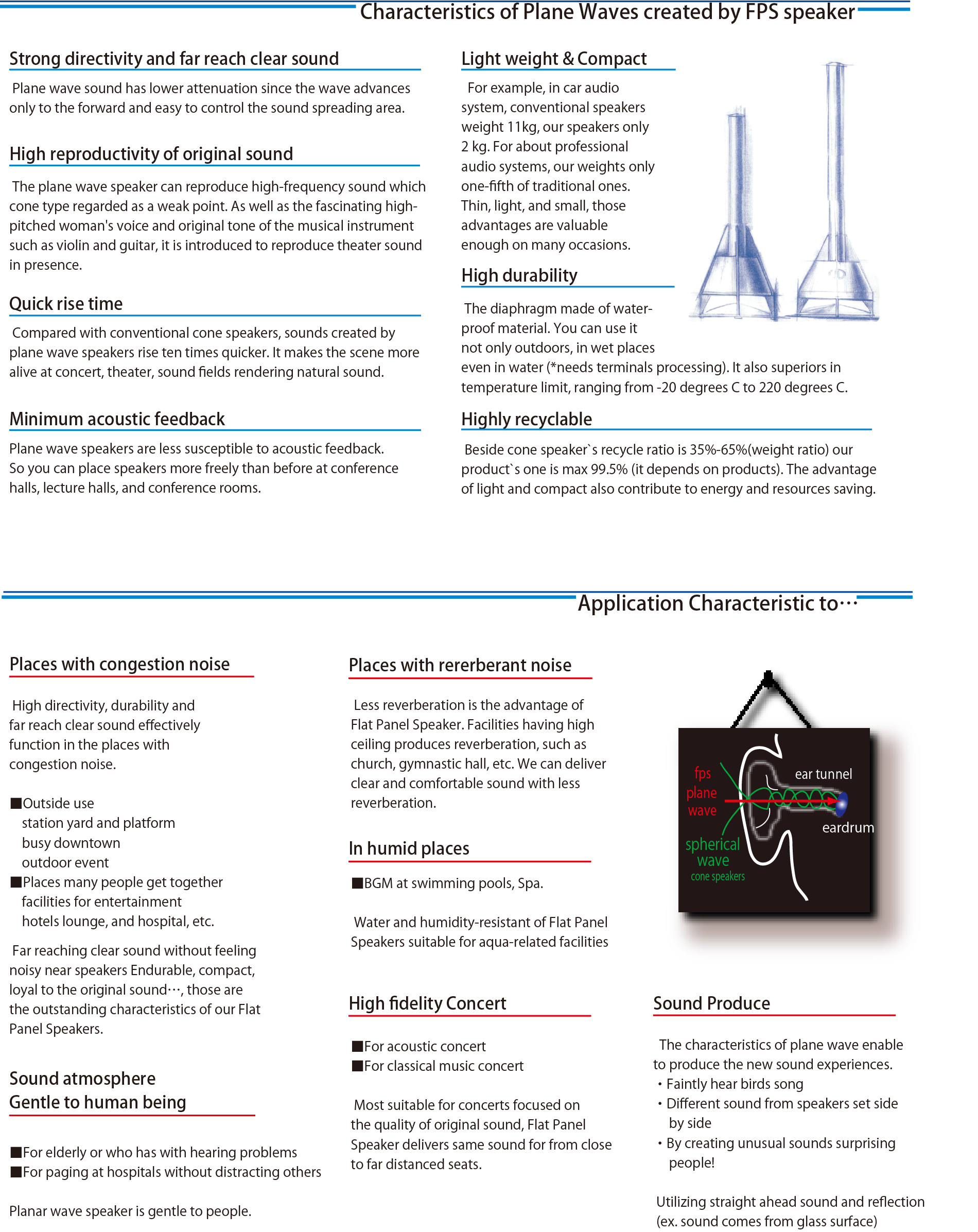 Sound Pressure Comparison of the Plane Wave and Spherical Wave

"Sound pressure by point sources and spherical waves (traditional dynamic cone speakers) are inversely proportional to the square of the distance from the sound source. If the sound pressure is 90 dB for 1m, then for 2m it will be 84 dB, a decrease of 6 dB. On the other hand, the line source (plane wave) is inversely proportional to the distance. If the sound pressure in 1m is 84 dB, in 2m it will be 81 dB decreasing only 3 dB. As seen above, we can say the plane wave is more efficient and does not lose its strength due to distance compared to the spherical wave.

The sound pressure is already reversed at the 4m point which is said to be a relatively short distance in the general practical use.

At a glance catalog specifications of the flat speakers are lower SPL than cone speakers, but at distances more than 5 m, they demonstrate their abilities.

*Note: This graph is not based on an actual survey. It is made from an image comparison that uses the average sound pressure level of the existing product and the theory value about the decrement of a point source and a line source. 1m/1w is the criteria for the comparison of the two speakers (point sources and spherical wave).

Resolve sound problems with the Characteristics of the FPS speakers

No other speaker can ensure the same volume with the same thinness. FPS flat panel speakers have always developed the higher performance with more thinner and lighter.

It makes easier to hear for elders and those with hearing difficulties, and easier to listening that an awkward pronunciation of foreign languages. It is also popular as a healing speaker.

About our Line-array type speakers such as Pipeline series, the outer box designed in the line array theory, and inside speaker units also made from the multi-cell type, so it's become double line arrayed speaker.

FPS speakers can replay the original sounds that cone speakers cannot replay, for example, the sound of fingers during contact of guitar strings, breathing that using the lead of woodwind instruments. You can hear almost real sounds of recording environment kept; the musicians are often surprised by its true sounds. You can also enjoy Hi-resolution sounds with FPS speakers.

FPS plane wave speakers have lower attenuation since the wave advance only to the forward and easy to control the sound spreading area.

The MCMA Transducer was developed by our company and has already granted patents in Japan and other countries. This technology is quite different from conventional cone speakers due to its sound waves (spherical wave and plane wave) and the speed of its sound transmission. FPS Flat Panel Speaker is the next generation speaker unit, this new generation speakers are composed of our newest flat speaker unit, "MCMA". Idealistic planar waves can be created by putting many micro-cells on polymer molecule vibrating diaphragm. The MCMA planar wave technology broadens the functions of sound. Patent granted countries: Japan, USA, EU, Russia, China, South Korea, India, Taiwan, Singapore, Malaysia and Indonesia. Currently applying for patents in other countries.

FPS Flat Panel Speakers use "Plane wave" technology.
An easy way of understanding the theory behind a "Plane wave" is to imagine a wave in the ocean. This wave will keep its shape until it reaches another obstruction that comes in its path. Our "Plane wave speakers" has similar characteristics to a wave. Electrical waves and laser light also use this same plane wave theory.